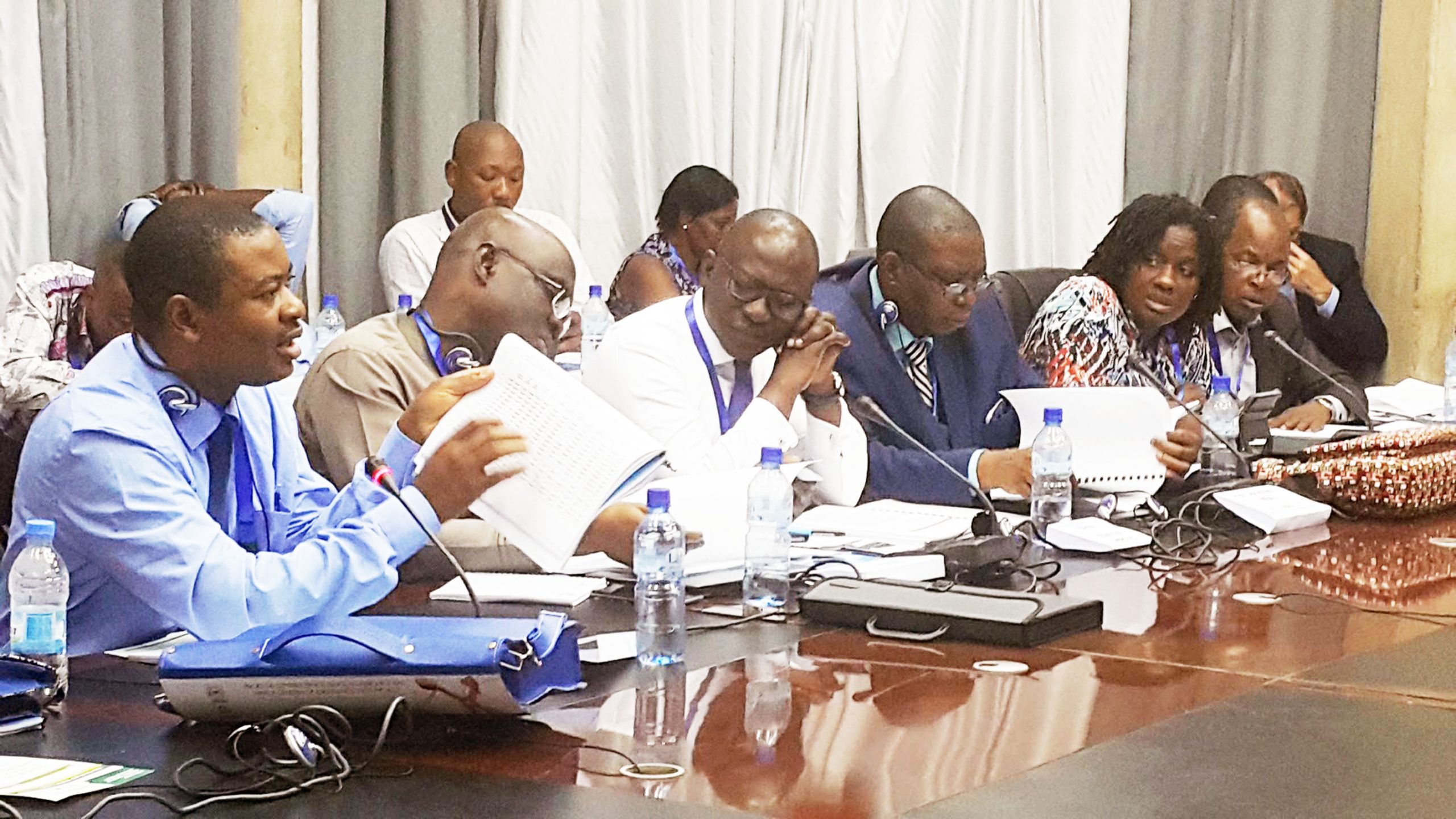 The meeting, which was chaired by PSC Member representing Burkina Faso, Professor Ramané Kaboré, was aimed at going over the Project status/progress as well as reviewing strategies for ensuring Project sustainability at the expiration of the World Bank’s intervention, in 2019. The meeting was also targeted at reviewing the impact of ACE I project as well as discussing prospects and objectives of ACE Impact, which is expected to kick off in 2019 and run for four to five years.

In his welcome remarks, Professor Ramané Kaboré, noted that it was an honour for his country to host the 12th sitting of the PSC and the 9th Project Workshop. He conveyed the government’s delight at being able to host other participating countries, following its inability to host, in November, 2017, as earlier scheduled. Professor Kaboré thanked members for their commitment to the ACE project, since inception and expressed optimism for fruitful deliberations.

Secretary General of the AAU, Professor Etienne Ehilé, also welcomed members on behalf of the Regional Facilitation Unit (RFU). He observed that, since the last meeting, in Accra, November, 2017, the Project had achieved several milestones and introduced some innovations, key among which was the maiden Higher Education Fair, held on 7 May, 2018. He observed the need to emphasise issues of sustainability, seeing as the Project was drawing to a close. Prof. Ehilé expressed optimism that discussions on the launch of ACE 3 (ACE-Impact), which had already commenced, would be concluded in the course of the meeting.

In his remarks, the new ECOWAS Commissioner for Education, Science and Culture, Professor Léopoldo Amado, a new comer at the PSC, expressed interest in the Project and hoped that deliberations at the meeting would enable him to better understand the workings of the ACE Project.

On behalf of the World Bank, Education Specialist and ACE Task Team Lead, Mr. Andreas Blom, commended the International Institute of Water and Environmental Engineering (2iE) for being the first ACE to host the PSC meeting and the upcoming workshop. He expressed optimism that the outcomes of the first Higher Education Fair would be impactful and widely disseminated.

Discussing the status of the ACE I Project, the meeting noted that the Project had recorded significant improvement since the last PSC meeting and regional workshop. With three out of five Project Development Objectives (PDOs) already achieved, the PSC observed that ACE I was well on track to achieving all PDO indicators before the expiration of funds from the World Bank.

Areas of appreciable improvement included research publications (with the ACEs largely exceeding Project targets) and increased student enrolment. Despite the rise in enrolment figures, generally, the meeting observed that the number of female students enrolled in the ACEs, which is currently at 25 percent, was yet to hit the Project target of 30 percent. The meeting also noted the need for the ACEs to make more effort in the enrolment of male and female regional students.

Other critical issues discussed during the course of the meeting included verification of results of the ACEs, international accreditation for programmes of the Centres; disbursement of funds to the ACEs; and supervision missions by subject matter experts.

On the implementation of ACE Impact, the meeting noted that a number of lessons had been learnt from the first phase of the ACE project and would be carried forth to the third phase. These include the need to select Centres that are tied to clearly-defined development challenges, the need for stronger upfront industry/sectoral engagement/commitment; the need for strong institutional and country ownership; and an opportunity for institutional impact with appropriate incentives. Other lessons include the need to strengthen regional networks; The need for upfront capacity building, outreach and coordination, to accelerate performance; and the need to leverage funding within the Project.

The objectives of ACE Impact, which is billed to span four to five years, include to improve the quantity of enrolled students (ultimately, graduates) in post-graduate programmes; to improve the quality of post-graduate programmes, such that students acquire the necessary theoretical knowledge and applied skills, upon graduation. The Project also aims to improve development impact, such that the knowledge from research and skills acquired by graduates are directly impacting development challenges.

Cognisant that knowledge acquisition and hiring of well-rounded graduates contribute meaningfully to long-term impact, it is expected that the ACE Impact project would impact significantly on the development of the region, by addressing, in concrete ways, the skills shortage and knowledge needs associated with a development challenge. It is important to ensure that the ACEs do not exist as an oasis of excellence but, rather, influence change in their host institutions. Equally important is the need to ensure the strong involvement of industry from the proposal development stage and throughout Project implementation.

The ACEs would be strongly linked to demand expressed by stakeholders working in the region and would focus on the following broad themes: (i) Applied Sciences, Engineering and Technology (energy, ICT and water); (ii) Health (Nursing and professional health trainers); (iii) Education (Excellence in teacher training); (iv) Environment (coastal resilience as well as Environmental Science and applied impact assessment); (v) Urbanisation and Transport (transport logistics, urban planning and design as well as housing/land development; and (vi) Quantitative economics, among others.

It is proposed that ACE Impact would feature a Steering Committee, with representatives of participating governments, which would provide overall guidance and oversight for the Project. It would have national government participation, which would offer implementation support and meet bi-annually, to review Project progress. It is expected that national governments would also be fully involved in the pre-selection, selection and implementation stages of the ACE Impact project.

The Project would involve ECOWAS as a regional higher education and skills technical agency, to contact the Regional Facilitating Unit (RFU), convene steering committee meetings and ensure sustainability as well as implement regional policy. Like the first phase of the ACE project, the AAU would be the RFU and would handle Monitoring and Evaluation, verification of results, capacity building, and logistics as well as coordinate work with partners. On their part, the Centres and host universities would ensure full implementation of their proposals.

The World Bank had, so far, confirmed available funding from Burkina Faso, Cameroon, Djibouti, Ghana, The Gambia, Guinea, Niger Republic, Nigeria, Senegal and Togo. It was still in discussion with and yet to confirm funding from Gabon and Guinea Bisssau. There was also the possibility of funding or co-funding from the French Development Agency (AFD), France’s inclusive public development bank, for Cote d’Ivoire, Benin Republic, Senegal and Nigeria.

The meeting also noted that AFD had proposed a supplementary loan/grant for the ACE Impact Project, targeted at several countries including Nigeria. This would be in two components, Component 1 being a loan for countries under the ACE Impact Project that may wish to supplement the loan from the World Bank; while Component 2, a grant, would go to the AAU for regional activities (workshops, conferences, visits, supervision, etc). The AAU would receive the grant and countries in the region would benefit from the regional activities.

The 12th PSC was preceded by the maiden “Higher Education Student Fair” of the ACE Project, held on the campus. About 300 participants took part in the Fair, which brought together stakeholders from the academia (including students and faculty), the private sector, industry, civil society, among others.

A highlight of the PSC meeting was the decision that the next Project Workshop would take place in February, 2019, in Djibouti.