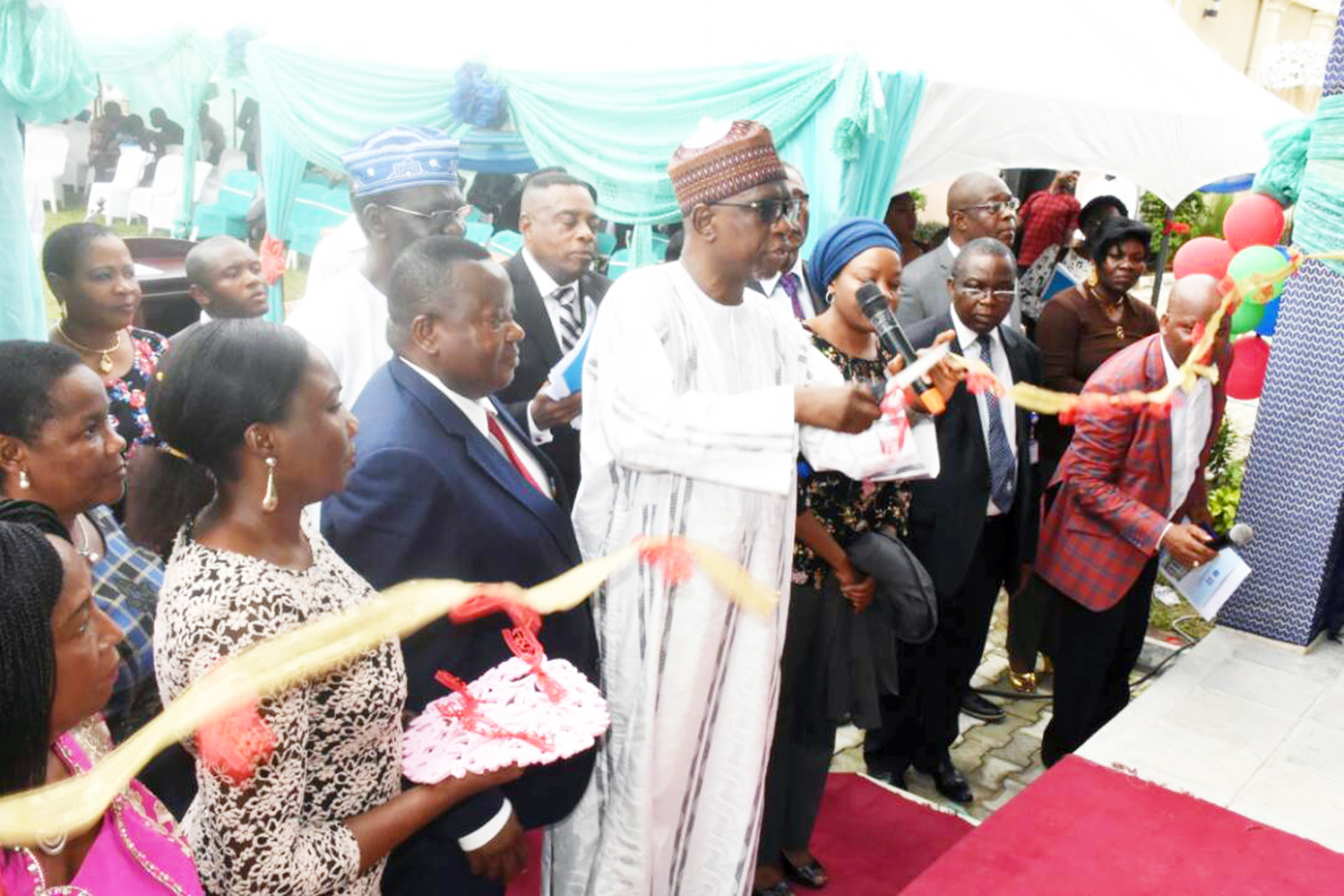 Quality education is key to the economic growth of every nation, the Honourable Minister of Education (HME), Malam Adamu Adamu, has said. The Minister made this assertion during the recent commissioning of the new building for the University of Port Harcourt’s (UNIPORT) Africa Centre of Excellence in Oilfield Chemicals Research (CEFOR).

Delivering the keynote address, Malam Adamu, who was represented by the Executive Secretary of the National Universities Commission (NUC), Professor Abubakar Rasheed, noted that huge investments in education, tertiary, in particular, are usually evident in a country’s rate of development. He, however, stated that universities should not be saddled with the sole responsibility of national development, adding that there must be viable linkages between universities and the real world or industry, if the universities are to make any meaningful contribution to national development.

Recalling the four pillars of the knowledge economy, as identified by the World Bank, the Minister noted that education and training of a skilled population, was key to creating, sharing and using knowledge. It was also important to have a dynamic information infrastructure, ranging from radio to the internet, to facilitate the effective communication, dissemination and processing of information. Yet another pillar is a regulatory and economic environment that enables the free flow of knowledge, supports investment in Information and Communications Technology (ICT), and encourages entrepreneurship. The final pillar, Malam Adamu said, is a network of research centres, universities, think tanks, private enterprises and community groups, necessary to tap into the growing stock of global knowledge as well as assimilate and adapt it to local needs and create new knowledge.

The Minister commended the many achievements of UNIPORT, particularly those recorded by CEFOR, which had, so far, graduated 39 PhD students, a figure unrivalled by any other ACE in Nigeria. Declaring the CEFOR building open, Malam Adamu expressed hope that the Centre would continue to achieve the goals for which it was established.

In his remarks, the Executive Secretary of the NUC decried Nigeria’s poor ranking in the Knowledge Economy Index, attributing it to inadequate investments in education as well as a lack of faith in education as the centrepiece of development.

Cognisant of the relevance of education to national development, the Commission had embarked on a reform of the Nigerian University System (NUS). To effectively reform, however, the NUC must reposition itself, to efficiently and effectively regulate the nation’s universities. The Executive Secretary stated that the NUC was, presently, in the process of reviewing and reappraising its commitment to university education, prior to approaching the government for improved funding. He, however, noted that not all challenges in the system were dependent on funds and tasked universities to conduct an internal assessment, with a view to correcting attitudinal vices among staff and students.

Earlier, in his welcome remarks, the Vice-Chancellor of the University, Professor Ndowa E. S. Lale, noted the impact of CEFOR on the University community. The Centre had introduced the concept of shared resources and services among various departments and faculties in the University, which, it is expected, would minimise duplication of efforts and optimise the utilisation of laboratory equipment and personnel. He commended the collaborative effort of staff, which had helped to engender effective multi-disciplinary research and stated that programmes under CEFOR and other institutes in the University were structured in such a way that students graduate within the stipulated period of time.

Professor Lale, however, noted the need to devise alternative means of funding CEFOR, in addition to the World Bank’s grant, to guarantee its sustenance beyond the expiration of Bank funds and expressed optimism that the University’s “can do” spirit would propel the Centre in the right direction. He thanked the Centre Leader, Professor Ogbonna Joel, for his vision and uncommon dedication to duty, adding that Professor Joel was proof that Nigerians can measure up to global best practices. The Vice-Chancellor commended the Academic Board, staff and members of the ACE steering committee, for their commitment to achieving excellence in the Centre.

Giving a progress report of CEFOR, Professor Joel highlighted some of its achievements to include enrolling a total of 130 PhD students, since inception. Of the 53 students admitted in the first batch, 37 graduated in March, 2017 and about 90% of them are gainfully employed. The Centre had admitted 70 new PhD students during the 2016/2017 session, nine of which are regional students and are also expected to graduate within the target time.

Other achievements, Professor Joel stated, included attainment of NUC accreditation for 12 of the Centre’s programmes; a gap analysis conducted for the Centre’s Petroleum and Gas Engineering programmes, in June, 2017; publication of over 100 papers in reputable journals, from CEFOR students’ research work and attracting more than 60 experts from both the academia and industry. He noted that CEFOR had also entered into partnerships with industry, professional bodies and foreign universities, as part of efforts to ensure that the Centre delivers on its mandate.

In a goodwill message, the World Bank Co-Task Team Lead, Ms. Aisha Garba, commended CEFOR, for its progress in student enrolment and for graduating a significant number of MSc and PhD students within the specified time frame. She expressed pleasure at the progress recorded in improving higher education, through the ACE project, adding that the Nigerian ACEs were showing a lot of promise in delivering on their mandate. She commended them for the results achieved, so far, particularly in the quality of education, relevant applied research and strong university-industry linkages.

Despite the progress recorded by the Centres, especially in student enrolment, Ms Garba noted that the demand for higher education had doubled over the last five years, leaving access at five percent, a fifth of the 25% global average. She observed skills shortages in addressing development challenges and poverty reduction in Africa, particularly in the areas of Science, Technology, Engineering and Mathematics (STEM). She decried a situation where Engineering graduates in Nigeria amounted to less than 10 percent of total graduates, while their counterparts in the social sciences, business and law programmes, accounted for more than 50 percent.

Education, she affirmed, is a priority for the World Bank, because of its potential to transform the African continent. Africa must, therefore, must work together, to ensure the success of the ACE project. The ACEs, in turn, must share resources and sustainable solutions as well as continue to train students, across borders.

The Co-Task Team Lead informed guests that the Bank was preparing to scale up the ACE project, through the Africa Centre of Excellence Impact Project, which would enable universities in Africa to respond to the dynamics of the African labour market, by ensuring the production of good quality graduates. The Bank, she said, recognised that all ACEs across Africa are working hard to resolve their challenges and ensure the success of the ACE project, by educating the next generation of scientists, researchers, leaders and innovators.

Immediate past Vice-Chancellor, Professor Joseph Ajienka, commended the NUC Executive Secretary for the proposed reforms in the NUS, describing him as an erudite and committed scholar as well as a friend of the University. Professor Ajienka thanked Professor Briggs for believing in industry partnership and for the critical role he played in securing the land for the Institute of Petroleum Studies, which houses CEFOR. He also expressed appreciation to Professor Joel and the Deputy Centre Leader, CEFOR, Professor Onyewuchi Akaranta, for putting together the proposal that won UNIPORT the Centre of Excellence.

With the commissioning, CEFOR relocates from its previous domicile in the University’s Emerald Energy Institute, an initiative jointly funded by the University and Total Exploration and Production and situated in UNIPORT’s Institute of Petroleum Studies (IPS).